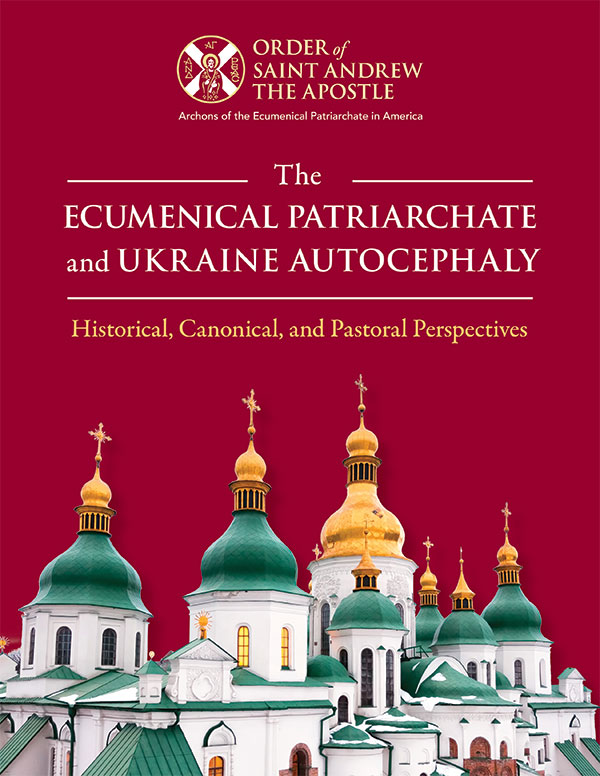 Today the Order of Saint Andrew the Apostle presents a one of a kind offering for all Orthodox Christians and indeed for all people of goodwill who are particularly interested in learning more about the Orthodox Church.
The Ecumenical Patriarchate and Ukraine Autocephaly: Historical, Canonical, and Pastoral Perspectives is presented in portable eBook format and now available to download through our website and social media platforms.
The eBook includes the following articles written by a diverse and noteworthy assembly of Orthodox commentators.
- Foreword by National Commander Dr. Anthony J. Limberakis
- Introduction: The Ecumenical Patriarchate and Ukraine Autocephaly by Evagelos Sotiropoulos (Editor)
- The Voice of Silence: A Monastic Voice on the Ukrainian Question by Mother Abbess Theoxeni
- Pastoral Perspectives of the Ukrainian Autocephaly: A Personal Face to a Political Issue by Fr. John Chryssavgis
- Penalty or Abuse of Power? Canonical Sanctions and Ukrainian Autocephaly by Fr. Nicholas Denysenko
- What has Korea to do with Ukraine? Russia’s Tragic Assault on Korean Unity by Fr. Perry Hamalis
- Ukrainian Autocephaly: Reflections from the Diaspora by Fr. Bohdan Hladio
- Pastoral Care for the Ukrainian Orthodox by Fr. Cyril Hovorun
- The Autocephaly of the Orthodox Church in Ukraine and the Canonical Prerogatives of the Ecumenical Patriarchate by Archbishop Job of Telmessos


- The Bulgarian Orthodox Church and Ukrainian Autocephaly by Dr. Daniela Kalkandjieva
- The Role of the Ecumenical Patriarchate in Granting Autocephaly to the Orthodox Church in Ukraine: A Canonical Perspective by Dr. Lewis Patsavos
- Reflections on Autocephaly by a Member of the Ukrainian Orthodox Church of the USA by Dr. Gayle Woloschak
The goal of this eBook is to present information regarding the Ecumenical Patriarchate and Ukraine Autocephaly that edifies and imparts grace to its readers (cf. Ephesians 4:29). In the words of Editor Evagelos Sotiropoulos, “The articles in this essay will hopefully add a measured quantity of love and hope – and fact – on the issue of the Ecumenical Patriarchate and Ukraine Autocephaly.”
We close with a short passage from the eBook’s Foreword written by National Commander Dr. Anthony J. Limberakis:
With the goal of making sure these materials reach the broadest possible audience, I have one request of you. Please share these materials with others. Indeed, I would like to ask each of you to email this collection to five other people and ask them to share this collection with five more.
The Order gratefully acknowledges and sincerely thanks all of those individuals, but most especially the esteemed contributors, who made this publication possible, in the service of the Church and to the Glory of God!