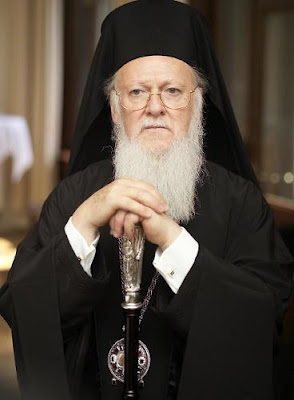 Middelburg (The Netherlands) - On May 12th, 2012 His All-Holiness the Ecumenical Patriarch Bartholomew, primus inter pares of the entire Orthodox Church, is going to receive the prestigious Four Freedom Award. The Four Freedoms Medals are presented to men and women whose achievements have demonstrated a commitment to those principles which President Roosevelt proclaimed in his historic speech to Congress on January 6, 1941, as essential to democracy: freedom of speech and expression, freedom of worship, freedom from want, freedom from fear.
In order to keep the legacy of President Franklin Roosevelt alive, the Roosevelt Institute honors outstanding citizens who have demonstrated a lifelong commitment to these ideals every year. The impressive ceremonies that mark the awarding of the Four Freedoms medals are held alternately in Hyde Park, New York and Middelburg, the Netherlands, where the Roosevelt Stichting, a private foundation, is responsible for organising the ceremony in the even-numbered years. Roosevelt's great-grandfather, James Roosevelt, was of Dutch ancestry, from the area of Middelburg, near the Belgian border.
Her Majesty Queen Beatrix and Prime-minister Mark Rutte intend to be present at the Four Freedoms Awards ceremony on May 12, 2012, 11.00 a.m. in the Nieuwe Kerk in Middelburg.

Freedom of Worship Medal
His All Holiness Ecumenical Patriarch Bartholomew I is nominated for his extraordinary efforts on behalf of religious freedom and his dedication to a dialogue of reconciliation among Christians, Muslims and Jews, which he started together with His All Holiness Pope John Paul II. Bartholomew’s lifetime commitment to secure basic religious freedom, not only for the people in his native Turkey, but also for the peoples of central and Eastern Europe, has identified him as one of the outstanding figures on the international scene who is truly dedicated to the meaning and accomplishment of the Four Freedoms. Patriarch Bartholomew I, also known as the "green Patriarch" gained worldwide respect for his efforts for the environment.
Αναρτήθηκε από Panandr στις 10:26 μ.μ.