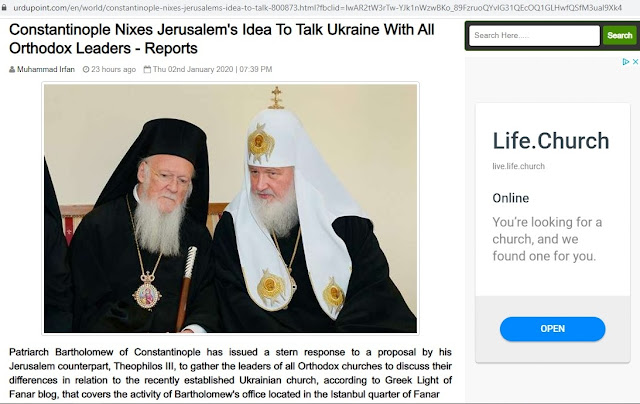 ATHENS (UrduPoint News / Sputnik - 02nd January, 2020)
Patriarch Bartholomew of Constantinople has issued a stern response to a proposal by his Jerusalem counterpart, Theophilos III, to gather the leaders of all Orthodox churches to discuss their differences in relation to the recently established Ukrainian church, according to Greek Light of Fanar blog, that covers the activity of Bartholomew's office located in the Istanbul quarter of Fanar.
According to the blog, the Jerusalem patriarch sent a letter to Bartholomew offering to hold a meeting of all top bishops in Jordan to tackle the issue of the current divide in the Orthodox world tied to the dispute over the recognition of Ukraine's Orthodox Church. Theophilos already voiced such a suggestion during his November visit to Moscow last year. A similar idea was put forward by Albanian Archbishop Anastasios and by a number of hierarchs of the Greek and Cyprus churches.
The blog claims Theophilos acted at the behest of the Moscow Patriarchate.
Bartholomew's response was strict, as in his mind Theophilos acted out of line, the blog says, adding that the Jerusalem patriarch's initiative failed to win over the majority of the Orthodox clergy, even among those who spoke out against Bartholomew's decision.
Last year Bartholomew handed over the tomos of autocephaly to the newly established Ukrainian church. The Russian Orthodox Church, along with the Ukrainian Orthodox Church of the Moscow Patriarchate, refused to recognize this. The Moscow Patriarchate has described the situation as the "legalization of schism," stressing that it would have catastrophic consequences and affect millions of Christians in Ukraine and other countries.
Αναρτήθηκε από panagiotisandriopoulos στις 11:27 μ.μ.