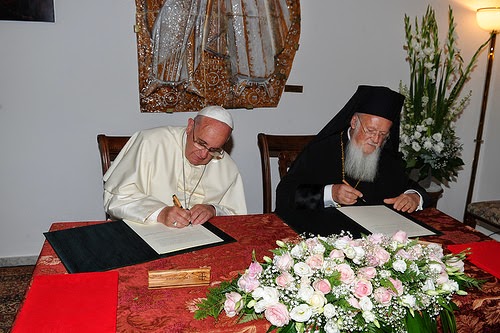 φωτογραφίες: Νικόλαος Μαγγίνας
May 25, 2014; Ecumenical Patriarch Bartholomew And Pope Francis Issue Joint Declaration
JERUSALEM – His All-Holiness Ecumenical Patriarch Bartholomew and His Holiness Pope Francis crossed a fifty-year milestone today, continuing the legacy of their predecessors Pope Paul VI and Ecumenical Patriarch Athenagoras. In 1964, those leaders broke a silence of centuries and paved the way toward greater dialogue.
Meeting this afternoon at the Apostolic Delegation in the Old City of Jerusalem, the global heads of the Roman Catholic and the Orthodox Churches signed a Joint Declaration affirming their commitment to seek unity between their respective ecclesial bodies. Moreover, they expressed their profound concern for the situation of Christians in the Middle East and for their fundamental right to remain full citizens of their homelands:
We are persuaded that it is not arms, but dialogue, pardon and reconciliation that are the only possible means to achieve peace.
The Pope and the Ecumenical Patriarch also reaffirmed their responsibility and obligation to foster a sense of humility and moderation so that all may feel the need to respect creation and to safeguard it with care:
Together, we pledge our commitment to raising awareness about the stewardship of creation; we appeal to all people of goodwill to consider ways of living less wastefully and more frugally, manifesting less greed and more generosity for the protection of God's world and the benefit of His people.
Finally, the two world leaders underlined the importance of religious understanding and dialogue:
We invite all Christians to promote an authentic dialogue with Judaism, Islam and other religious traditions. Indifference and mutual ignorance can only lead to mistrust and unfortunately even conflict. (see full text of the Joint Declaration below) 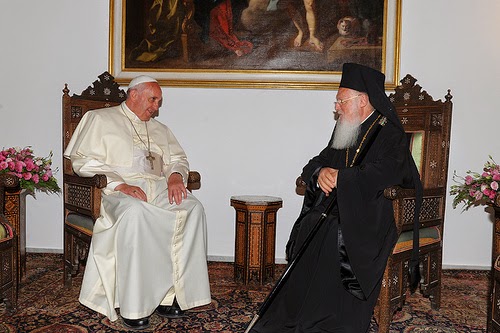 Joint Declaration by Ecumenical Patriarch Bartholomew and Pope Francis
1. Like our venerable predecessors Pope Paul VI and Ecumenical Patriarch Athenagoras who met here in Jerusalem fifty years ago, we too, Pope Francis and Ecumenical Patriarch Bartholomew, were determined to meet in the Holy Land "where our common Redeemer, Christ our Lord, lived, taught, died, rose again, and ascended into Heaven, whence he sent the Holy Spirit on the infant Church".[1] Our meeting, another encounter of the Bishops of the Churches of Rome and Constantinople founded respectively by the two Brothers the Apostles Peter and Andrew, is a source of profound spiritual joy for us. It presents a providential occasion to reflect on the depth and the authenticity of our existing bonds, themselves the fruit of a grace-filled journey on which the Lord has guided us since that blessed day of fifty years ago.
2. Our fraternal encounter today is a new and necessary step on the journey towards the unity to which only the Holy Spirit can lead us, that of communion in legitimate diversity. We call to mind with profound gratitude the steps that the Lord has already enabled us to undertake. The embrace exchanged between Pope Paul VI and Patriarch Athenagoras here in Jerusalem, after many centuries of silence, paved the way for a momentous gesture, the removal from the memory and from the midst of the Church of the acts of mutual excommunication in 1054. This was followed by an exchange of visits between the respective Sees of Rome and Constantinople, by regular correspondence and, later, by the decision announced by Pope John Paul II and Patriarch Dimitrios, of blessed memory both, to initiate a theological dialogue of truth between Catholics and Orthodox. Over these years, God, the source of all peace and love, has taught us to regard one another as members of the same Christian family, under one Lord and Saviour, Jesus Christ, and to love one another, so that we may confess our faith in the same Gospel of Christ, as received by the Apostles and expressed and transmitted to us by the Ecumenical Councils and the Church Fathers. While fully aware of not having reached the goal of full communion, today we confirm our commitment to continue walking together towards the unity for which Christ our Lord prayed to the Father so "that all may be one" (Jn 17:21).
3. Well aware that unity is manifested in love of God and love of neighbour, we look forward in eager anticipation to the day in which we will finally partake together in the Eucharistic banquet. As Christians, we are called to prepare to receive this gift of Eucharistic communion, according to the teaching of Saint Irenaeus of Lyon[2], through the confession of the one faith, persevering prayer, inner conversion, renewal of life and fraternal dialogue. By achieving this hoped for goal, we will manifest to the world the love of God by which we are recognized as true disciples of Jesus Christ (cf. Jn 13:35).
4. To this end, the theological dialogue undertaken by the Joint International Commission offers a fundamental contribution to the search for full communion among Catholics and Orthodox. Throughout the subsequent times of Popes John Paul II and Benedict the XVI, and Patriarch Dimitrios, the progress of our theological encounters has been substantial. Today we express heartfelt appreciation for the achievements to date, as well as for the current endeavours. This is no mere theoretical exercise, but an exercise in truth and love that demands an ever deeper knowledge of each other's traditions in order to understand them and to learn from them. Thus we affirm once again that the theological dialogue does not seek a theological lowest common denominator on which to reach a compromise, but is rather about deepening one's grasp of the whole truth that Christ has given to his Church, a truth that we never cease to understand better as we follow the Holy Spirit's promptings. Hence, we affirm together that our faithfulness to the Lord demands fraternal encounter and true dialogue. Such a common pursuit does not lead us away from the truth; rather, through an exchange of gifts, through the guidance of the Holy Spirit, it will lead us into all truth (cf. Jn 16:13). 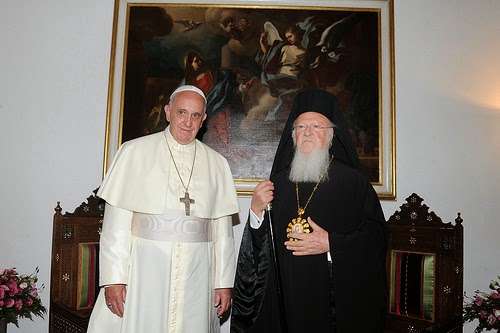 5. Yet even as we make this journey towards full communion we already have the duty to offer common witness to the love of God for all people by working together in the service of humanity, especially in defending the dignity of the human person at every stage of life and the sanctity of family based on marriage, in promoting peace and the common good, and in responding to the suffering that continues to afflict our world. We acknowledge that hunger, poverty, illiteracy, the inequitable distribution of resources must constantly be addressed. It is our duty to seek to build together a just and humane society in which no-one feels excluded or emarginated.
6. It is our profound conviction that the future of the human family depends also on how we safeguard – both prudently and compassionately, with justice and fairness – the gift of creation that our Creator has entrusted to us. Therefore, we acknowledge in repentance the wrongful mistreatment of our planet, which is tantamount to sin before the eyes of God. We reaffirm our responsibility and obligation to foster a sense of humility and moderation so that all may feel the need to respect creation and to safeguard it with care. Together, we pledge our commitment to raising awareness about the stewardship of creation; we appeal to all people of goodwill to consider ways of living less wastefully and more frugally, manifesting less greed and more generosity for the protection of God's world and the benefit of His people.
7. There is likewise an urgent need for effective and committed cooperation of Christians in order to safeguard everywhere the right to express publicly one's faith and to be treated fairly when promoting that which Christianity continues to offer to contemporary society and culture. In this regard, we invite all Christians to promote an authentic dialogue with Judaism, Islam and other religious traditions. Indifference and mutual ignorance can only lead to mistrust and unfortunately even conflict.
8. From this holy city of Jerusalem, we express our shared profound concern for the situation of Christians in the Middle East and for their right to remain full citizens of their homelands. In trust we turn to the almighty and merciful God in a prayer for peace in the Holy Land and in the Middle East in general. We especially pray for the Churches in Egypt, Syria, and Iraq, which have suffered most grievously due to recent events. We encourage all parties regardless of their religious convictions to continue to work for reconciliation and for the just recognition of peoples' rights. We are persuaded that it is not arms, but dialogue, pardon and reconciliation that are the only possible means to achieve peace.
9. In an historical context marked by violence, indifference and egoism, many men and women today feel that they have lost their bearings. It is precisely through our common witness to the good news of the Gospel that we may be able to help the people of our time to rediscover the way that leads to truth, justice and peace. United in our intentions, and recalling the example, fifty years ago here in Jerusalem, of Pope Paul VI and Patriarch Athenagoras, we call upon all Christians, together with believers of every religious tradition and all people of good will, to recognize the urgency of the hour that compels us to seek the reconciliation and unity of the human family, while fully respecting legitimate differences, for the good of all humanity and of future generations. 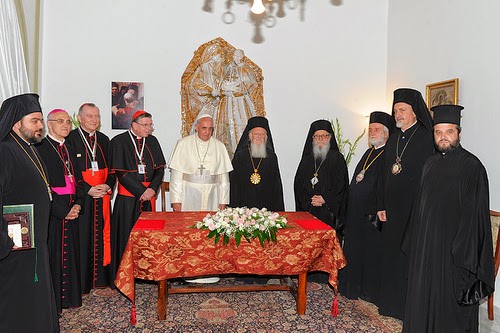 10. In undertaking this shared pilgrimage to the site where our one same Lord Jesus Christ was crucified, buried and rose again, we humbly commend to the intercession of the Most Holy and Ever Virgin Mary our future steps on the path towards the fullness of unity, entrusting to God's infinite love the entire human family. " May the Lord let his face shine upon you, and be gracious to you! The Lord look upon you kindly and give you peace!" (Num 6:25-26).
______________________________
[1] Common communiqué of Pope Paul VI and Patriarch Athenagoras, published after their meeting of 6 January 1964.
[2] Against Heresies, IV, 18, 5 (PG 7, 1028)
Αναρτήθηκε από panagiotisandriopoulos στις 10:24 μ.μ.