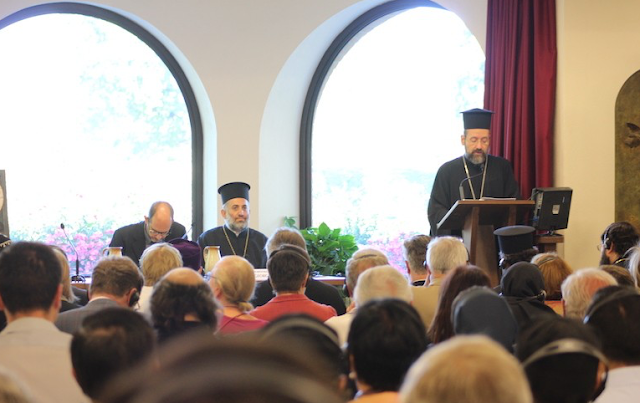 TOWARDS AN ECUMENISM OF REPENTANCE ON THE XXIV INTERNATIONAL ECUMENICAL CONGRESS OF ORTHODOX SPIRITUALITY IN BOSE
Between 7-10 September 2016, a “miracle” happened in the Monastery of Bose (Italy): among about 200 participants of the XXIV International Ecumenical Congress of Orthodox Spirituality were bishops, clergy, monastics and lay people coming from all the 14 Orthodox Local Autocephalous Churches, as well as representatives from the Oriental Orthodox Churches, the Roman Catholic Church, the Anglican Communion and the Reformation. A great ecumenical venue, where 19 distinguished speakers reflected this year on “Martyrdom and Communion” by exploring the notion of martyrdom and the martyrologia of the Churches of Russia, Georgia, Romania, Bulgaria, Armenia and England.
In his communication read in absentia, His Beatitude Patriarch John X of Antioch pointed out in the very first session towards an “ecumenism of repentance”. His Beatitude suggested to cultivate in the contemporary society the spirit of dialogue instead of the culture of the sword. This expression has marked the discussions of this year’s congress. It was echoed by the call for an “ecumenism of blood” made by Cardinal Kurt Koch in the last session, who underlined that in an eschatological perspective, the martyrs unite us with the Kingdom of God and therefore could be seeds of the ecclesial unity.
On several occasions, the idea of a creation of a common martyrologion was expressed. Although there is a difference between the recognition of martyrs coming from different Christian communities and the liturgical commemoration of them in the liturgy of the Churches, which from an Orthodox perspective implies full canonical Eucharistic communion between them, the study and the memory of Christian martyrs could be indeed a step further towards Christian unity in a world even more disturbed by terrorism, fanaticism and religious persecution. Nevertheless, the notion of martyrdom should be studied further, since it is not always clear whether a person dying for the principles of the Gospel, for the Christian values or for her Christian nation is a martyr of Christ. As His All-Holiness Ecumenical Patriarch Bartholomew stressed in his greeting to the participants of the congress, “the goal of martyrdom is communion”. Communion is what distinguishes martyrdom from massacre.
The brothers and the sisters of the Monastery of Bose have to be thanked, for consecrating themselves over almost a quarter of century to the organisation of such congresses that serve not only for the promotion of the Orthodox spirituality, but definitely are an expression of an “ecumenism of hospitality and fraternity”, making possible for Orthodox Christians from different local Churches to meet between themselves as well as with their “separated brothers” of the Western Churches and Confessions. A success story that might definitely inaugurate a genuine “ecumenism of repentance”
+ Job of Telmessos