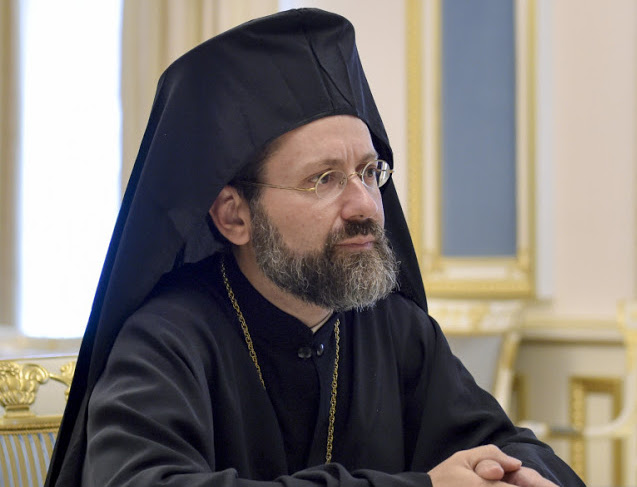 Δημοσιεύουμε σήμερα την απάντηση του Αρχιεπισκόπου Τελμησσού κ. Ιώβ στον δημοσιογράφο Γιώργο  Παπαθανασόπουλο, ο οποίος τον Μάρτιο δημοσίευσε κείμενό του στο διαδίκτυο κατηγορώντας τον Αρχιεπίσκοπο ως "Διεθνιστή" («Διεθνιστής Ορθόδοξος Αρχιεπίσκοπος»).
Η απάντηση του Τελμησσού Ιώβ δημοσιεύθηκε στα αγγλικά, στο τεύχος Μαρτίου 2019 του «Ενημέρωσις», δελτίου της Μόνιμης Αντιπροσωπείας του Οικουμενικού Πατριαρχείου στο ΠΣΕ.
Following a recent interview to the WCC website where I reflected on my new role as Rector of the Institute of Post-graduate Studies in Orthodox Theology in Chambésy, in the context of international Geneva and the Churches’ challenges to justice and peace and where I stated that “before all our religious or ethnic specificities, we are first of all citizens of the world and therefore that we have a great responsibility for the world”, I have been criticized by a certain G. Papathanasopoulos in a Greek newspaper for being an “Internationalist Orthodox Archbishop”.
The critique, which sounds really weird in the context of international Geneva, is in fact symptomatic of a certain close-minded nationalistic Greece. As a matter of fact, this shows once more that the greatest disease of contemporary Orthodoxy, since the 19thcentury, is nationalism or what we call ethno-phyletism. Condemned as an ecclesiological heresy by the pan-orthodox Council of Constantinople of 1872, which stressed that “the Church should not be confused with the destiny of a single nation or a single race”, ethno-phyletism was once more condemned by the Holy and Great Council of Orthodox Church gathered on Crete in 2016.
The Holy and Great Council tries to find a just balance between the local and the universal, avoiding two extremes — nationalism and globalization —, as we read in its encyclical: “In opposition to the levelling and impersonal standardization promoted by globalization, and also to the extremes of nationalism, the Orthodox Church proposes the protection of the identities of peoples and the strengthening of local identity. As an alternative example for the unity of mankind, she proposes the articulated organization of the Church on the basis of the equality of the local Churches” (Encyclical, 15).

In my interview, I never stated that ethnic identity should be erased on a benefit of a global, international one, but affirmed that “before all our religious or ethnic specificities, we are first of all citizens of the world”. Such a vision is founded in the universality of Christianity. Christianity, and therefore the Church of Christ, has never been identified with one single nation. As Apostle Paul put it in his Epistle to the Galatians, “There is neither Jew nor Gentile, neither slave nor free, nor is there male and female, for you are all one in Christ Jesus” (Gal 3:28). The purpose of the incarnation of the Son of God was not to erase ethnic diversity, but to bring the whole world to salvation. God “wills that all men should be saved, and come to the knowledge of the truth” (1 Tim 2:4), as Saint Paul states it in his Epistle to Timothy. Universality of salvation is based on the fact that the whole world is the creation of God and is called to know Him and to enter into deeper communion with Him.
Such a deep theological statement, with cosmological and soteriological dimensions, has many implications with regards to contemporary issues. First of all, with regards to environmental issues, we recognize that our planet is our common “home”, which is the creation of God. With regards to the peaceful cohabitation of religions and peoples, we confess that every human being has been created in the image and likeness of God (Gen 1:26) and therefore ought to be regarded not less than the least of our brothers (cf. Mt 25:40). As the Holy and Great Council stated, “the Orthodox Church considers it is her duty to encourage all that which genuinely serves the cause of peace (Rom 14:19) and paves the way to justice, fraternity, true freedom, and mutual love among all children of the one heavenly Father as well as between all peoples who make up the one human family” (Mission, C5). Furthermore, “the Orthodox Church confesses that every human being, regardless of skin color, religion, race, sex, ethnicity, and language, is created in the image and likeness of God, and enjoys equal rights in society. Consistent with this belief, the Orthodox Church rejects discrimination for any of the aforementioned reasons since these presuppose a difference in dignity between people” (Mission, E2). For these reasons, the Orthodox Church condemns fundamentalism and violence in the name of God, and promotes respect, peace and reconciliation of peoples and religions through dialogue.
The Ecumenical Patriarchate of Constantinople bears since the 6thcentury the qualificative of “Ecumenical”. This qualificative shows the ecumenicity of the throne of Constantinople which is not limited nor identified to any ethnical or national boundary. Of course, the theological tradition of the see of Constantinople is based on Hellenism, so as Christianity itself has been developed on the basis of Hellenism as the Orthodox theologian Georges Florovsky has stressed it, but not on a narrow-minded ethnic folklore, but on a genius culture and civilization that has served as a bridge between different nations and people living together, at the beginning of the first millennium, in one Roman empire.
The ecumenical character of the Church of Constantinople is the foundation of its leading role in fostering pan-Orthodox unity and cultivating a supranational and cosmopolitan vision within the Orthodox world. For this reason, the Ecumenical Patriarchate is concerned by the unity of the Orthodox Church and the communion between the various local autocephalous Churches, a role that has been illustrated by the convocation of the Holy and Great Council. For this reason, the Ecumenical Patriarchate has a leading role in conducting inter-Christian and inter-faith dialogues. The Ecumenical Patriarchate always took initiatives regarding the protection of the environment, the safeguarding of children, and different other enterprises for promoting In an anonymous writing from the end of the 2ndcentury we read: “For the Christians are distinguished from other men neither by country, nor language, nor the customs which they observe. For they neither inhabit cities of their own, nor employ a peculiar form of speech, nor lead a life which is marked out by any singularity. […]. But, inhabiting Greek as well as barbarian cities, according as the lot of each of them has determined, and following the customs of the natives in respect to clothing, food, and the rest of their ordinary conduct, they display to us their wonderful and confessedly striking method of life. They dwell in their own countries, but simply as sojourners. As citizens, they share in all things with others, and yet endure all things as if foreigners. Every foreign land is to them as their native country, and every land of their birth as a land of strangers. […] They pass their days on earth, but they are citizens of heaven...” (Epistle to Diognetus, 5). It is the only way that Christians can still be today “the salt of the earth” (Mt 5:13).
Αναρτήθηκε από panagiotisandriopoulos στις 10:40 π.μ.