IN HONOUR OF PATRIARCH BARTHOLOMEW: ORTHODOXY AND ECOLOGY CONFERENCE 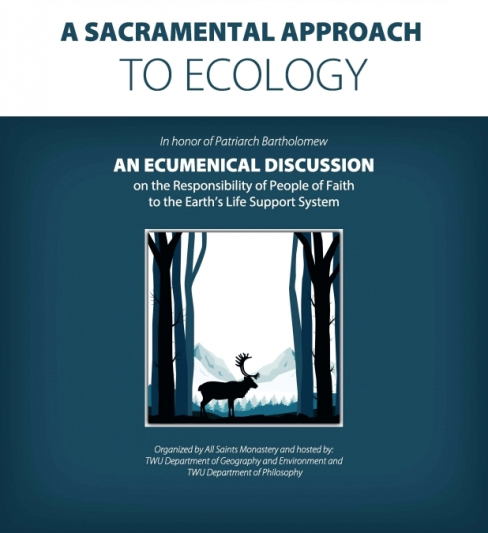 Orthodoxy and Ecology Conference: “A Sacramental Approach to Ecology”
All Saints Monastery/Trinity Western University
October 6-7, 2017
by Ron Dart
During the spring and summer of 2017, retired Archbishop Lazar (Puhalo) of the Orthodox Church in America, David Goa (Orthodox), Brad Jersak (Orthodox), Chris Morrissey (Roman Catholic), and Ron Dart (Anglican) met a few times to organize an ecumenical conference on ecotheology, dedicated to the “Green Patriarch,” His All-Holiness Bartholomew I of Constantinople. The planning unfolded well and wisely. The opening session was scheduled for the evening of Friday, October 6 at All Saints Monastery in Dewdney BC, while a full day was planned for Saturday, October 7 at Trinity Western University in Langley BC.
A substantive group met at All Saints Monastery to launch the 2-day conference. Archbishop Lazar read “Reflections of the Ecumenical Patriarch Bartholomew I on the Christian Vocation of Ecology”—a fine and fit way to begin the conference.
Steve Bynum, an Orthodox Christian who is Senior Producer of Worldview Radio WBEZ in Chicago, moderated the evening. He allotted about 10 minutes to each of the three presenters:
Father Nilos Nellis of the Archdiocese of Canada of the Orthodox Church in America, Chris Morrissey, and Ron Dart. Father Nellis poignantly discussed the inner disposition and habits that needed to be cultivated for a proper attitude towards the earth and ecological issues. If such inner ways of seeing and being did not exist, the external clashes and tensions would be more difficult to resolve.
Chris Morrissey highlighted the varied and layered affinities between Pope Francis and Patriarch Bartholomew on ecological issues.


Ron Dart, from a more historical perspective, pondered the Anglo-American attitudes, on the right of centre, that have shaped both a dominant and destructive attitude towards nature, and the counter-voice and activism on the centre and centre left that hold high a more “sacramental approach to ecology.” Dart concluded by pointing to Elizabeth May, who as leader of the Federal Canadian Green Party and an Anglican, not only thinks and talks about the issue, but acts politically on the ecological crises through which we are living at the present time.
After a break to enjoy some of the delights prepared by the monastery, an hour was spent in a lively Q&A session that emerged from the 10-minute mini-lectures.
Saturday was the bumper crop day. The sheer range of discussions on faith and ecology, poetry and ecology, and spirituality and ecology was a wonder to witness. Never has the Orthodox Tradition on the West Coast sponsored such a wide-ranging event with perspectives from such a variety of denominational and theological traditions—it was, truly, an ecumenical and irenic gathering of those keen and eager to understand the obvious connections between faith and the environment.
The morning began with an introduction by Archbishop Lazar that highlighted the pioneering and global reach of Patriarch Bartholomew and his vision of the Church and ecology. In short, this essential issue can no longer be ignored or nudged to the margins. The impact of a deteriorating climate and environment is having an impact on one and all.
David Goa presented an incisive approach to the Orthodox and ecological dilemma we face. Chris Morrissey elaborated, in a visual and textual way, on both the Roman Catholic and overarching issues that reflect our present controversies, highlighting various responses to it. Ron Dart, once again, described the larger and longer historical Anglo-American tradition that has been both pro and contra environmental awareness and activism.
The presentations by Goa, Morrissey, and Dart were then taken in a variety of directions by professors from Trinity Western University.
Erica Grimm, who teaches in the Art Department at Trinity Western and is a fine painter herself, delivered a superb lecture on both the tradition that has demeaned nature and, more importantly, leading thinkers and activists who see the environment as sacrament and icon.
Jennifer Doede, who teaches in the English Department at Trinity Western, did a splendid presentation on Gerald Manley Hopkins and his poetic and religious vision of land, nature and, yet again, sacramental vision of the human journey.
David Clements, of Biology and Environmental Studies at Trinity Western, approached the issue of faith and ecology from a more personal and scientific pathway.
The bringing together of Grimm, Doede, and Clements enriched yet further the possibilities of where such a dialogue might go in the future between men, women, artists and scientists, theology and history. Indeed, the Orthodox Tradition had put on a feast, and—unlike the previous evening in which few students were at the monastery—the event at Trinity Western was packed with curious and enquiring students.
After everyone dispersed for lunch and then returned, the afternoon was devoted to students and lecturers meeting in small groups to further discuss the main themes of the morning lectures. Many of the conclusions reached and probes into areas not pondered pointed the way forward to options for yet another such event.
There can be no doubt that this event transcended the tribalism of various clans in the Christian Tradition and illuminated, quite clearly, that regardless of the type and history of a Christian tradition and denomination, the issue of ecology is something that can unite one and all.
The underlying vision and presence, in a sense, of the Ecumenical and Green Patriarch, Bartholomew I, was the mentor and leading light of the 2-day gathering at All Saints Monastery and Trinity Western University. Who knows what seeds sown by such a plough-to-soil conference will bear abundant fruit in the Church, society, and the world?
Amor Vincit Omnia
Ron Dart holds an MCS from Regent College in Vancouver and an MA from the University of British Columbia. He currently teaches as an associate professor in the Department of Political Science, Philosophy & Religious Studies at University of the Fraser Valley in Abbotsford BC. He has extensive experience collaborating with Orthodox representatives in various ecumenical endeavours.
Αναρτήθηκε από panagiotisandriopoulos στις 4:40 μ.μ.