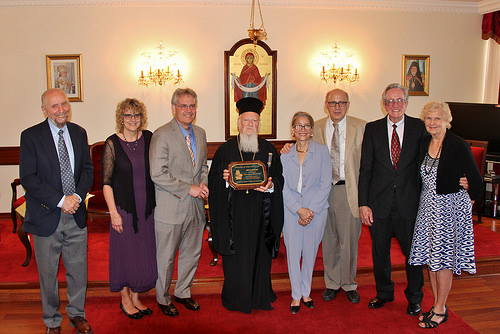 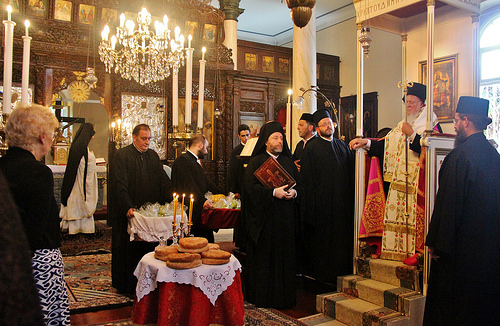 His All-Holiness receives prestigious environmental award
On Thursday, August 6, 2015, His All-Holiness Ecumenical Patriarch Bartholomew was awarded the Steward of Creation Award by the National Religious Coalition on Creation Care, an interfaith organization that regularly represents environmental positions before the US Congress, the White House and other government agencies. Past recipients include Wendell Berry, Bill McKibben and James Hansen.
After presiding over the Divine Liturgy for the Feast of the Transfiguration of our Lord at the Transfiguration Monastery on the island of Prinkipos, His All-Holiness welcomed the members of the NRCCC’s steering committee, which included Rev. Tom Carr (and his wife Peg), Dr. Tom English (and his wife Jan), Dr. Lise van Susteren (and her husband Jonathan Kempner), and executive director Frederick Krueger. Alicia Krueger accompanied the group as photographer.
After the Divine Liturgy, the members of the NRCCC visited the former Prinkipos Orphanage, the site of a planned interfaith patriarchal Environment Center. At the luncheon, which was graciously offered by His Eminence Metropolitan Iakovos at the Metropolis of the Princes’ Islands, the members spoke briefly on specific contributions and unique contributions of His All-Holiness in raising awareness about climate change. On receiving the award, the Ecumenical Patriarch responded with a greeting of thanks and presented the visitors with commemorative gifts. On the previous day, the members of the NRCCC visited the Phanar and received an official tour of the Patriarchal Church and Offices. 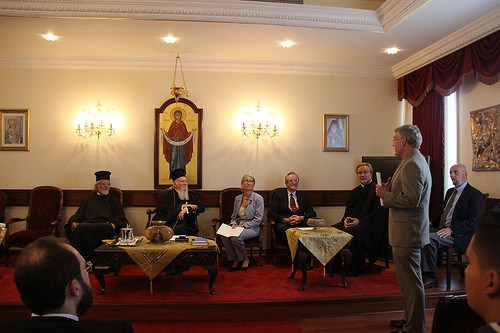 Address By His All-Holiness Ecumenical Patriarch Bartholomew On Receiving the 2015 Steward of Creation Award
(Prinkipos, August 6, 2015)
Dear and distinguished friends,
Welcome to the Ecumenical Patriarchate and to the Holy Metropolis of the Princes Islands. We have just observed the Feast of the Transfiguration of Jesus Christ, which took place some 2,000 years ago on Mount Tabor in Palestine. The Gospel reading of the day is from St. Luke, chapter 17, which describes this extraordinary and symbolical event in the life of Jesus, when the glory of God was revealed not only in His face (which was “as bright as the sun”) but also on His clothes and on everything around Him (which became “as white as the light”). Today, we celebrate the beautiful and bountiful presence of God’s energies that radiate in all of creation. This is why this morning you witnessed a beautiful tradition in our Church: Each year, on August 6th, we bless the first-fruits of the vineyard as a sign of thanksgiving to God for the gift of grapes and wine, of food and drink.
The Christian Gospel underlines this same joy and splendor that permeates all creation. And today’s hymns and icons reveal the effect of God’s transfiguration and illumination upon the whole creation. Because salvation and healing are not just spiritual enterprises; they are also material events. Every part and every particle of this world is elevated and embraced, lifted up and enlightened by God’s power and presence. This means, as St. Ephraim the Syrian writes: “Wherever you turn, you will see a symbol of God; wherever you look, you can read the handwriting of God.” 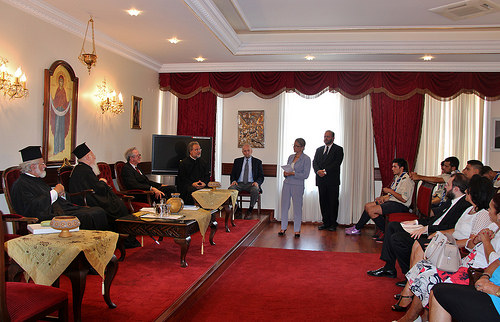 How fitting, then, that you should travel from such a great distance – as members of the National Religious Coalition on Creation Care in the United States of America – in order to pray with us on this special occasion, which reflects so profoundly the Orthodox spiritual teaching about the sacredness and beauty of all creation. You represent a broad range of faith communities and church confessions; you embrace the religious and scientific worlds; and you respect both the biblical heritage and ethical principles behind the protection of God’s creation. We are deeply grateful for your presence.
As you know, our personal interest and patriarchal involvement in promoting awareness on creation care began many years ago and continues to this day with the organization of regular ecological summits on an international level and the establishment of critical alliances with important institutions (such as the United Nations) and individuals (including Pope Francis). In all that we do and say, we strive for an inter-religious and inter-disciplinary approach. Precisely because we are convinced that we can only achieve change when we work together, moved by the inspiration of God that created this universe and our planet out of love, and motivated by the preservation and protection of our world for the sake of future generations.
Of course, this world is not just a gift from God; it is a challenge for humanity. We have at last come to learn the truth that we have mistreated the natural environment and its resources. The consequences are plain and painful. They are evident in the air that we breathe, the water that we drink, the food that we consume, the emotional and physical problems that we face in our health, but also in our relationships with each other on the local, regional, national and global levels. This is precisely why we have decided to attend in person the COP 21 conference in Paris later this year and why we have accepted President François Hollande’s invitation to participate actively in the various preparatory meetings. In this regard, we are also pleased to learn of the very recent Clean Power Plan of President Obama, which is a significant step in the right direction for the United States of America and which is already approved by the U. N.
However, this is a day and moment of celebration. We are extremely grateful for your presence, sincerely humbled by your gracious remarks, and greatly honored by your award, the 2015 Steward of Creation Award. May God continue to strengthen the efforts of the National Religious Coalition on Creation Care; may God always strengthen you in your invaluable ministries in the religious as well as in the secular worlds; and may you and your loved ones enjoy the gifts that God has showered on and entrusted to His creation.
God bless you all. 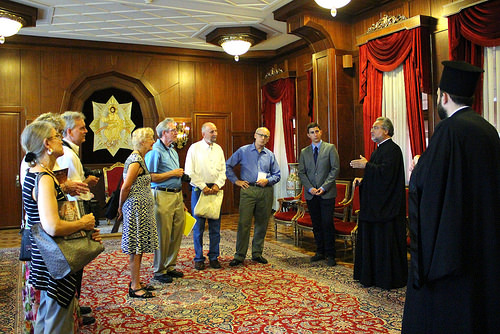