Exclusive: With Ukraine’s autocephaly, the Moscow Patriarchate shows its true face to the world 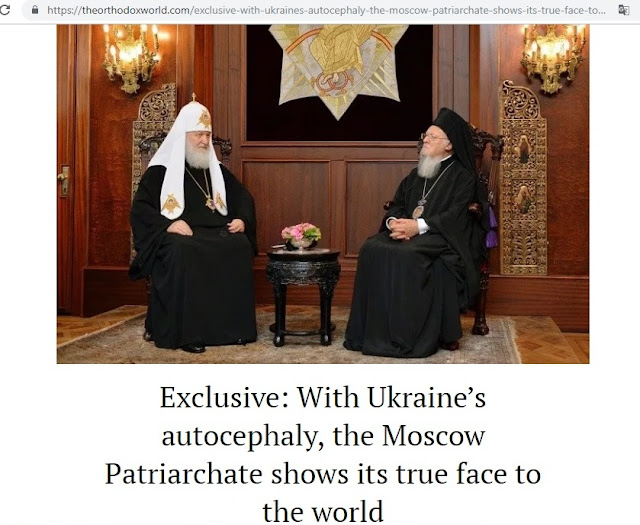 I have described His All-Holiness Ecumenical Patriarch Bartholomew
as The Patriarch of Our Century
Metropolitan Epiphanios of Kyiv and all Ukraine was enthroned as primate of the Orthodox Church in Ukraine (OCU) on Sunday, February 3, 2019, at the Cathedral of St. Sophia in that country’s capital. This followed the granting of the Tomos of Autocephaly to the OCU by His All-Holiness Ecumenical Patriarch Bartholomew and the Holy and Sacred Synod of the Ecumenical Patriarchate of Constantinople on the Great Feast of the Theophany.
This issue was discussed at the September 2018 Synaxis of the Hierarchs of the Ecumenical Throne; this is an important point because it shows that this was not a mere personal decision of the Ecumenical Patriarch and that thoughtful study and careful examination were exercised before the final decision was taken. For the Ecumenical Patriarchate, this is its canonical prerogative and consistent with historical precedent.*
To describe these developments in global Orthodoxy as controversial would be a considerable understatement. The propaganda pushed and false narratives contrived by the Moscow Patriarchate (MP) and its satellite of supporters against the Church of Constantinople have been relentless and at times repulsive.
When did it become appropriate or acceptable for Christian dialogue and Orthodox discourse to descend into such darkness? Though what should one expect from some who use the Body and Blood of Christ as a bargaining chip in negotiations.
The issue of autocephaly for Ukraine is complex and multifaceted – there are different areas of focus and approaches used by those commenting on the issue, including, of course, this writer. While there are geo-political dynamics between Constantinople and Moscow, one area that is overlooked in all the hyperbole is the pastoral care of the Orthodox flock in Ukraine.
The motivation of His All-Holiness, like a sincere father who cares equally for all his children, was to offer compassion and bring comfort to the millions of Orthodox who found themselves outside of the canonical Church. The rapid opposition and smear campaign against him serves only to show the true character and now not so hidden agenda of his detractors.